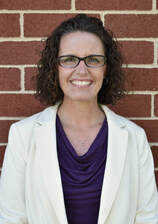 Mrs. Thomas is in her first year of teaching at Three Rivers Community Schools, and her 19th year as a band director.  She earned her Master of Music in Conducting in 2007, from Southern Oregon University, and her Bachelor of Music in Music Education in 2002, from Western Michigan University.  Mrs. Thomas directs the HS Symphony Band, Wildcat Marching Band,  8th Grade Middle School Band, 7th Grade Intermediate Band, assists the HS Concert Band, and teaches the woodwind students in the 6th Grade Beginning Band.

Mrs. Thomas is an active member of the ASBDA and MSBOA.  She has served in many offices while in MSBOA District 6, and she has served as a clinician at area schools in southwest Michigan.  She performs regularly on her primary instrument, trombone, as a member of the Lake Effect Jazz Band in St. Joseph, MI.  In 2013, Mrs. Thomas was named Teacher of the Year in MSBOA District 6.

Mrs. Thomas and her husband Brandon, have two daughters, Mia & Madilyn, and they are happy to join the Wildcat family. 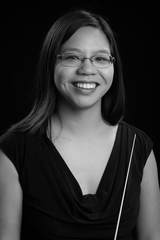 Ms. Vo is in her ninth year of teaching at Three Rivers Community Schools.  She earned her Bachelor of Music in Music Education from Western Michigan University in 2011, and her primary instrument is the bass trombone.  Ms. Vo directs the High School Concert Band and 6th Grade Beginning Brass and Percussion, as well as assisting the Wildcat Marching Band, 8th Grade Middle School Band, and 7th Grade Intermediate Band.

Under Ms. Vo's direction, the Middle School Band program has steadily grown in size and developed a high standard for performance.  The 7th Grade Band and 8th Grade Band have earned Division One "Superior" ratings at MSBOA District Band Festival for seven consecutive years and five consecutive years, respectively.  Many of her students have earned distinguished ratings at MSBOA Solo & Ensemble Festival and participated in district honors band. In addition to her main teaching responsibilities, Ms. Vo maintains a private lesson studio of trumpet, horn, trombone, and euphonium students.  Ms. Vo is an active member of the Kalamazoo Concert Band, where she plays the bass trombone. ​